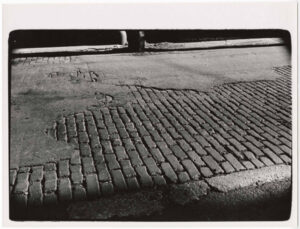 Steven Donahue photographed Chicago from 1963–1972 with a hiatus from September 1967- September 1969 when he was drafted and served in the Army at Sandia All Services Base in Albuquerque, New Mexico.

Steven arrived in Chicago at age 19 from the rural Michigan Thumb area to attend the Ray Vogue School of Design. But his interest in photography began when he was a kid trying to take pictures of the stars through his telescope. After failing to get his photographs printed through the local drug store, he asked to learn basic darkroom techniques from the local studio photographer.

Chicago was a new experience for him. He had always lived in a natural setting, but instantly took to the wonderful architecture of the city. His attention to detail and inclusion of the natural world is evident in his city pictures: tree shadows on buildings, birds flying around skyscrapers downtown and scenes along Lake Michigan.

After graduating from Ray Vogue he took classes at Roosevelt College, eventually landing a job at Maselli Studio as a food photographer for magazines. During this period he met several musicians and learned to play blues harmonica from Corky Siegel of the Siegal Schwall Blues Band. He loved listening to the blues throughout his life.

He was drafted in 1967 and became an MP. It was a poor fit for him. Somehow, he convinced the army to allow him to be a base photographer. It allowed him some time in the darkroom, but included photographing suicide victims – one a friend.

After returning to Chicago in late 1969 he was hired by two World War II veterans to be a custom color printer for AnRo Color Service. AnRo allowed him to use the darkroom after hours and he spent many hours printing his own black-and-white photographs.

In Chicago, Steven continued to hone his photographic skills and took black and white photography courses at Illinois Institute of Technology. He left Chicago with his new wife in October 1972. Eager to participate in the Back to the Land movement, they agreed to housesit the family farm for a couple of years. Their stay stretched to 7 years while his retired parents served in VISTA and the Peace Corps

In Michigan he opened Steven’s Studio in Harbor Beach and photographed the Michigan Thumb area intensively until moving to Albuquerque. In 1985 he opened Central Photographic in Albuquerque, a custom black and white lab, gallery, and studio and worked there until his death in 2013. Here too, he carved out time to do his own work which included landscapes, people, experimentation with dancers and moving lights, and fantastical hand colored creations. Through the years he taught many people darkroom and studio techniques and mentored many kids and people with disabilities.

To view work created in and around Chicago, please visit Ryerson and Burnham Archives of the Art Institute of Chicago.